In partnership with the church, GNM produces culturally appropriate material, containing the Good News of Jesus in the local spoken language. GNM’s material equips individuals, congregations and organisations in reaching out to those who do not know much about Jesus and his story, especially oral communicators.

Good News Media is an evangelical ministry helping Christian workers, evangelical churches and missionaries to reach the non-reading community with the Gospel of Jesus Christ by supplying them with:

All our audio-visual material is ideally suited for cross-cultural evangelism in more than 65 languages of Southern Africa. In order to use our evangelism programmes effectively, we supply a unique MP3 player specially designed for missionary outreach to oral communicators in areas without electricity or batteries.

“Faith comes by hearing and hearing by the Word of God.”

The ministry of Gospel Recordings was founded in Los Angeles in 1937. At that time Joy Ridderhof lay on her sickbed after returning from Honduras. All she felt was a deep sense of disappointment and sorrow at having to leave her beloved converts behind – people who in most cases were unable to read or write and relied on a verbal message to bring them to a saving knowledge of Christ.

SOMETHING TO LEAVE BEHIND

If only she could have left behind recorded messages in their native Spanish, how wonderful a legacy! In this way the existing converts could be built up in their faith and other people reached … after all, “faith comes by hearing and hearing by the Word of God.” 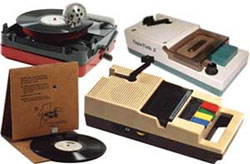 Thanks to several friends’ generosity, Joy was able to see the beginning of this coming to fruition as she recorded the first gospel record in Spanish on the last day of 1938. What started out as a trickle soon became a veritable flood as enquiries for the Spanish records started coming in thick and fast not only from Honduras, but increasingly from other Spanish-speaking countries in Central and South America as well.

A turning point was reached in 1940. Joy was asked to make a number of gospel recordings for the Navajo Indians in Arizona. Even one additional language would lead to requests for more and ever more languages to be recorded. She agreed, however, and so began the fulfilment of the wider commission – to take the gospel to the ends of the earth.

Together with the records printed in more and more mother tongues of the world, different tailor-made players were developed, so that that people in remote areas could listen to the Message without having to have electricity or a constant supply of batteries.

Presently the ministry is active in more than 24 countries (with office facilities in over 40 countries) of which most are under the co-ordination of an international fellowship called Global Recordings Network. Audio gospel messages and audiovisual teaching aids are now available in 5 700 different languages. Partnering with many other long-term and home-based missionaries and their expertise, we want to reach many who have been deprived from the privilege of reading his Word.

MAKE A DIFFERENCE THAT LASTS

After sharing the good news of Jesus with any person or group, it’s always good to leave something behind. If they cannot read, it doesn’t help to leave lots of literature. So be creative, give them audio-visual tools! The material will build them up and equip them better to reach out to others.